Looking for a Savings option that actually grows your deposits?

Looking for Savings Options that actually GROW your savings?

With banks offering zero deposit rates and, in some cases, charging business owners for holding large sums on deposit, it’s time to be clever about where you place your finances.

In our opinion, the Zurich Corporate savings account is an option for business owners for some of their company money on deposit. It is a perfect fit for investing some of your company money in a low and negative interest rate environment.

You have 3 ways of saving with the Zurich saving account.

This is proving to be extremely popular with business owners as they are not committing to investing a lump sum at the outset and this may suit your business cashflow. Also, by investing an amount each month we believe that you can take more risk in relation to the type of investment fund that you choose.

Option 2:  Lump sum investment only
Here you have the option of investing a lump sum and they will allow that the full amount, up to a certain level, will be fully accessible without penalty if required.

The level of risk and the type of fund that we recommend will depend on your attitude to risk, which we will define and guide you with, but we generally recommend a lower risk rate fund for a lump sum investment, especially as it’s your business money.

Option 3:  You can invest both a monthly amount and a lump sum

This is another option depending on the cashflow requirements of your business. The lump sum amount is fully accessible if needed. We generally recommend a lower risk strategy for the lump sum investment and higher risk for the monthly amount.

So what are the potential Investment returns?

Obviously, the longer term of investment the better the investment return

Tax treatment of gains
There is a once off tax of 25% on any gain made on investment.

You could be missing a better return on your deposits. For more information give Colm, Financial Advisor at Cregan Kelly & O’Brien Financial Planning today!

Here are just 2 funds that Zurich offer and the investment returns are as follows. 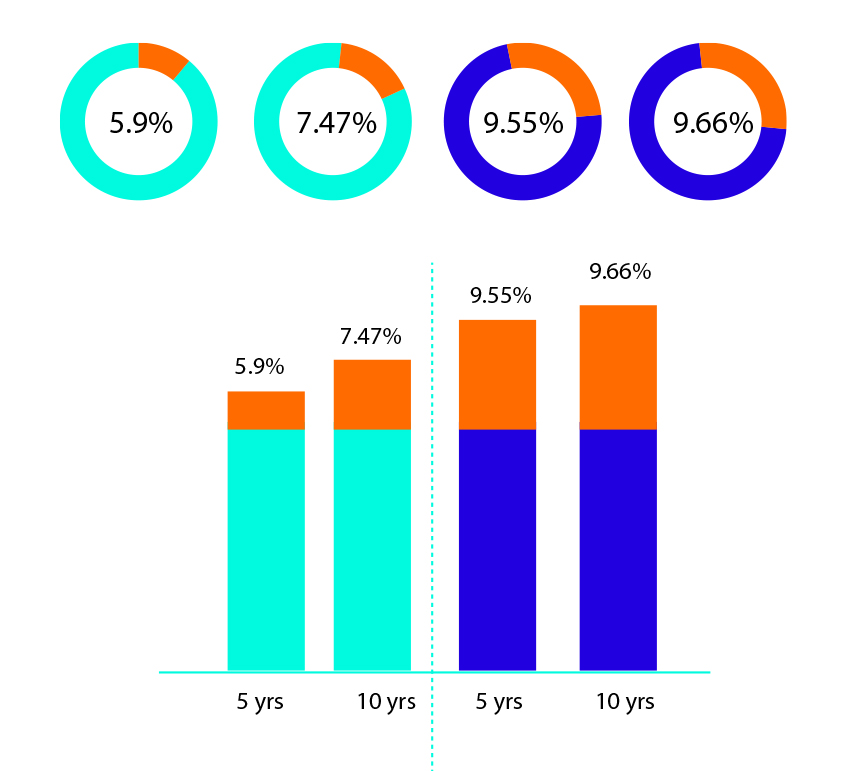 There is a once off tax of 25% on any gain made on investment.

For more information on the above , please contact Colm Kelly of Cregan Kelly O’Brien Financial Planning on 01 8700370

Now would be a good time for a financial review

Irish households put away approx €13.4 billion of savings in banks and credit unions in the 12 months to the end of November, as they adopted a cautious approach to their finances during the coronavirus pandemic, according to the Central Bank. (Irish Times 06.12.20)

Household deposits rose by more than 12 per cent to a record €124 billion. Companies, excluding financial firms, set aside an additional €12 billion of deposits during the period, pushing the overall figure up 20 per cent to an all-time high of almost €72 billion, according to the Central Bank

“Deposits from Irish households and non-financial corporations continued to record strong growth in November, as the impact of Covid-19 continued to diminish individuals’ opportunity and willingness to spend, and likely induced further precautionary savings,” the bank said.

For the month of November alone, lodgements by households and businesses exceeded withdrawals by €2.5 billion, as the Republic was in the middle of second period of heightened coronavirus restrictions and families planned Christmas spending.

The €13.4 billion annual increase in household savings was the greatest since the Central Bank started compiling data in the current format in 2003.

Have you a savings plan in place?

We can help with whatever your goals are and whatever your individual means are. Talk to us today and get that savings account started.

Retiring Bank employees missing out on up €180,000 tax free

Retiring Bank employees missing out on up €180,000 tax free cash from their pension by taking the wrong option at retirement.

Bank employees who are retiring shortly or being made redundant may be losing out on up to €180,000 of tax free and pension money from their pension by taking the wrong options on their pension.

Most bank employees are members of Defined Benefit pension scheme. The level of pension benefits that they receive will depend on their number of years or service and their final salary.

So for example if an employee is on a salary of say €70,000 at their normal retirement age and they have completed the full 40 years of service , in general they would receive  a tax free lump sum of €105,000 tax free which is 1.5 times their final salary along with an annual  pension of 50% of their final salary which is €35,000 per annum.

There is another option that retiring bank staff need to consider. If the retiring employee requests a transfer value, then the overall level of his tax free payment can increase considerably.

Based on a recent example we have a bank employee who is retiring at age 60 after completing the full 40 years of service. His final pensionable salary was approximately €80,000 and he would have received the following pension benefits which are the normal pension benefits from the Defined Benefit pension.

He requested a transfer value, and he received a guaranteed transfer value of approximately €1,300,000, based on this valuation he would receive the following.

Let us assume that there is no investment growth on the ARF from the time he invests the money d to when he draws down on it.

In this case the employee receives an additional €180,000 and more or less the same annual pension benefits.

In this case could decide to buy a property through his ARF with some of his pension assets.

With the €300,000 he has received he could clear any outstanding mortgage or personal debt and may be invest some of the money. He could if he wanted to use the tax-free cash payment to maybe buy an investment property or buy a property abroad, but he has more options open to him with €300,000 as against €120,000.

There are positives and negatives to each option, and you will need to take advice from a pension advisor and work out what is the best option for you.

If you have any questions in relation to any of the above, please call or email me

Gifting to your Children Tax Free

How to gift your child their house deposit tax free

Finding or funding the deposit for your first home is never easy and with deposit rates on the floor, the small-gift exemption for some parents may be an ideal way to help build up a fund that can be used by their children at some point in the future to buy their first home.

We outline here some of the details of the scheme that you may find of use.

Firstly What exactly is it?

With capital acquisitions tax of the order of 33 per cent and the tax-free inheritance threshold from parent to child down substantially from a high of €542,544 to €335,000, the small-gift exemption is one way parents can avoid potential tax bills. (source Irish Times November 2020)

The exemption means that someone can gift up to €3,000 to another person each year without any incurring any tax liability for the receiver.

It’s important to note that the person making the gift does not need to have a relationship with the recipient to avail of the tax exemption; however, it is typically used by parents to gift money to children or grandchildren.

For families with significant assets, putting the money away each year as opposed to generating significant tax liabilities can make a lot of sense.

For those with expensive properties – say a family with three children and a house worth €1 million and other investments, may see it as a practical way of mitigating any future tax liabilities.

You must keep a record of the annual transfers in order to be compliant from a Revenue perspective and you will need to ensure that the account the money is going into is in the name of the child.

Accounts can be set up with Banks/Financial Intuitions,  Credit Unions or putting the money into a trust account which may also offer an investment vehicle rather than deposit-type savings.

Make sure you have adequate funds for your own needs first

With property so expensive parents can feel under pressure to help finance their childrens property purchase and €6,000 a year is a lot of money, which could be paying off your own mortgage or boosting your pension, so make sure that these areas are taken care of first.

Why do I need Life Assurance

Do I need Life Insurance? video was provided by Zurich Life Protection

Sometimes life takes an unexpected turn and some serious illnesses can significantly impact a person’s life. That’s why serious illness cover is so important.

We think our cancer, heart attack and stroke definitions won’t be beaten in Ireland. And when it comes to making a claim, we want to make it easy for your customers.

Cancer patients losing an average of €18,000 a year

Cancer patients losing an average of €18,000 a year

I was very interested in the recent article about the average cost that cancer patients have to incur in order to pay for the cost of their cancer treatment.

On average cancer patients are losing €18,000 per annum in income or €1500 per month as a result of their cancer diagnosis according to a “Real Cost of Cancer Report” by the Irish Cancer Society.

A simple Serious Illness policy would help offset the cost of these additional bills. It would provide a tax free lump sum at a time when it most needed so that patients could focus on their treatment without having to worry about the financial costs.

Cost of €50,000 of Serious Illness cover for a term of 20 years, this would cover the cost of treatment for 3 years

All prices quoted above are based on non smokers